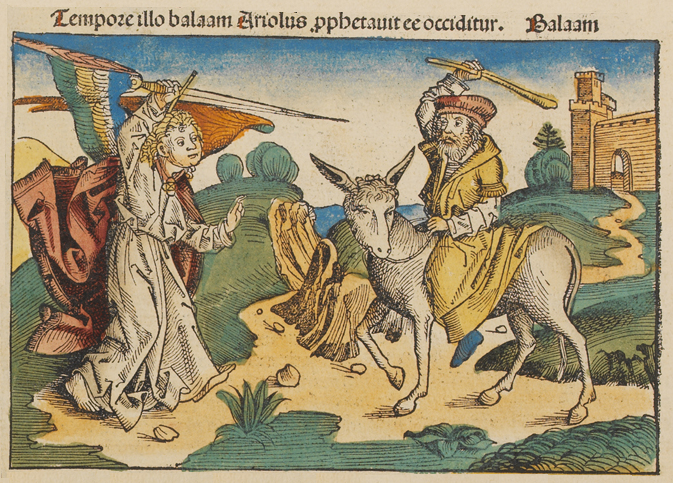 Balaam is best known for his talking donkey, and rightly so.

But there's more to his story than that.

He first shows up in Numbers 22, when Balak, the king of Moab, asks him for help.

Balak had heard about the many genocides that the Israelites had committed with God's assistance, and he didn't want his kingdom to be next. So he sent some princes as messengers to Balaam.

Why Balak thought Balaam would could help isn't clear, but apparently Balaam was a famous pagan prophet from Pethor, near the Euphrates River. Anyway, Balak's messengers came to Pethor and told him that Balak wanted him to come to Moab and curse the Israelites.

After the messengers delivered their message, God came to Balaam and said,

Which is a strange thing for an omniscient god to ask. But oh well.

After Balaam filled God in on the details about the messengers' visit, God said to him,

Don't go with them and don't curse the Israelites. Because they are blessed. (v.12)

So Balaam told the messengers that God said he couldn't go with him.

The messengers returned to Moab and gave Balak the bad news. Balak sent another set of princes, more honorable than the first, to deliver the same message to Balaam.

Balaam gave them the same answer:

I won't go to Balak even if he gives me his house filled with silver and gold.

God said I can't go and that's that.

And, sure enough, that night God said something else to Balaam:

So Balaam saddled his famous ass went with the princes to Moab.

And then the story gets weird.

You just can't please some gods!

And this is where the angel shows up; the ass sees the angel and tries not to run him over; Balaam hits the ass for not going straight; and Balaam, the angel, and the ass have an extended conversation.

I'm skipping over this part since everyone knows the story about Balaam's talking ass. And that's not what this post is about. (If you don't know the story, though, you should read it. It's one of the funniest in the Bible. You can find it in verses 23-35)

When Balaam finally arrives in Moab with his talking ass, he told Balak to make seven altars and sacrfice an oxen and a ram on each. While Balak was busy with that, Balaam went off to talk with God. God put a nonsensical parable in Balaam's mouth, which Balaam repeated to Balak at the burnt offering. (For the details see 23:7-10.)

The parable didn't please Balak, since it didn't curse the Israelites.

But Balak has an idea. He asks Balaam to go somewhere else (the field of Zophim), where Balaam can curse the Israelites. So they go there and Balaam tells Balak to make seven altars and offer God another seven oxen and seven rams, while he wanders off to talk to God again. God puts another parable in Balaam's mouth, which he recites to Balak. This one includes this amazing line:

The people will rise up as lion and drink the blood of the slain. (v.24)

But this parable didn't curse the Israelites either, so Balak suggested they try again.

This time they went to the top of Peor. Balaam told him to build another seven altars and sacrifice seven more oxen and rams, while he talks to God again. God told him another parable, which included some familiar lines.

God is as strong as a unicorn.

He will eat up nations, break their bones, and pierce them through with his arrows. (24:8)

Balak had finally had enough of Balaam and his parables. He told him to go home.

Balaam said he'd leave, but first he had some more parables about what the Israelites would do in the future. (They'll destroy Balak and his people.)

And that's it. That's all the Bible says about Balaam.

He did whatever God asked him to do, didn't curse the Israelites, and recited God's parables to Balak.

And yet Balaam is killed in the Midianite massacre (Num 31:8) for encouraging the Israelites to "commit trespass against the LORD in the matter of Peor." (16)

Now this might seem a bit obscure to those who aren't familiar with "the matter of Peor", which is the story after Balaam's in Numbers 25.

Here is a brief summary:

The Israelites commit whoredom with the daughters of Moab. 25:1-3

God and Moses respond by hanging up heads and forcing the people to kill each other 25:4-5

Phinehas stops God's plague by murdering an Israelite man and a Moabite woman while they were having sex. (But not before 24,000 people were killed in the plague.) 25:6-18

You might wonder why Balaam's name doesn't occur in the summary. Well, that's because his name isn't mentioned anywhere in the entire chapter which tells the story about "the matter of Peor." Balam had nothing to do with it, according to the bible story itself.

The New Testament writers also condemn Balaam for "loving the wages of unrighteousness" (2 Pet 2:15), committing some unspecified "error" (Jude 11), and teaching Balak to sacrifice to idols and commit fornication (Rev 2:14). There is no evidence for any of these accusations in the story of Balak in Numbers 22-24.

It's true that Balaam mistreated his ass. But that really seemed more God and the angel's fault than Balaam's.

The hero of the story is clearly Balaam's ass. She behaved better and made more sense than Balak, Balaam, the angel and, most especially, God.