Leviticus tells us how to kill animals for God and how to kill people for breaking God's laws. So it only has time for two killings. But they are doozies.

In the first killing, God burns Aaron's sons to death for offering "strange fire." And in the second, God commands a blasphemer to the stoned to death.

Here are the two killings in Leviticus.

The story begins with Aaron's sons, Nadab and Abihu, burning "strange fire before the Lord," some kind of weird incense that God didn't like very much.

Nadab and Abihu, the sons of Aaron, took either of them his censer, and put fire therein, and put incense thereon, and offered strange fire before the LORD, which he commanded them not. Leviticus 10.1

So God burned them to death.

And there went out fire from the LORD, and devoured them, and they died before the LORD. 10.2

And here's what Moses said to Aaron afterwards.

Then Moses said unto Aaron, This is it that the LORD spake, saying, I will be sanctified in them that come nigh me, and before all the people I will be glorified. 10.3a

God burned Aaron's sons alive so that God would "be sanctified in them" and "glorified."

Moses warned Aaron not to mourn the death of his sons (by uncovering his head or tearing his clothes) or God would kill him too, along with all the people.

Moses said unto Aaron ... Uncover not your heads, neither rend your clothes; lest ye die, and lest wrath come upon all the people. 10.6

So Aaron did as he was told, and watched in silence as his sons were burned to death by God.

17. A blasphemer is stoned to death

Remember the stoning scene from Monty Python's The Life of Brian? A man (Matthias, Son of Deuteronomy of Gath) is about to be stoned to death for blasphemy. Here's what he says in his own defense:

I had a lovely supper and all I said to my wife was, "That piece of halibut was good enough for Jehovah."

Whereupon all the people begin throwing stones at him for saying the name, "Jehovah."

Well, this story from Leviticus is pretty much the same, except here two guys are fighting and one of them blasphemes.

So they brought him to Moses so he could ask God what to do about it.

God tells Moses that everyone must stone the blasphemer to death.

The LORD spake unto Moses, saying, Bring forth him that hath cursed without the camp; and let all that heard him lay their hands upon his head, and let all the congregation stone him. ... He that blasphemeth the name of the LORD, he shall surely be put to death. 24:13-16

Then Moses tells the people what God told him to tell the people (to stone the blasphemer to death).

Moses spake to the children of Israel, that they should bring forth him that had cursed out of the camp, and stone him with stones. 24:23a

And that's what they did.

And the children of Israel did as the LORD commanded Moses. 24:23b 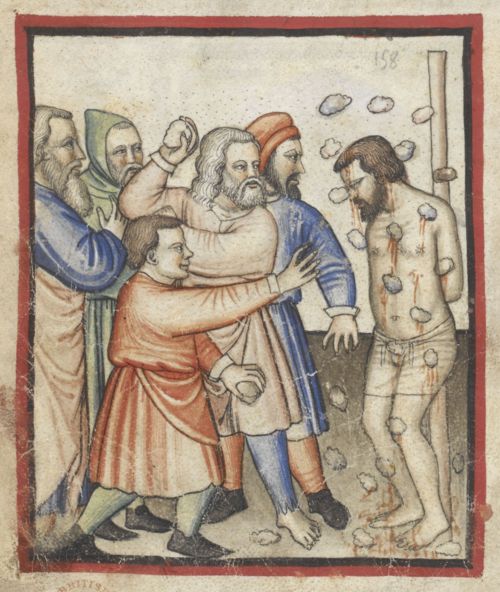